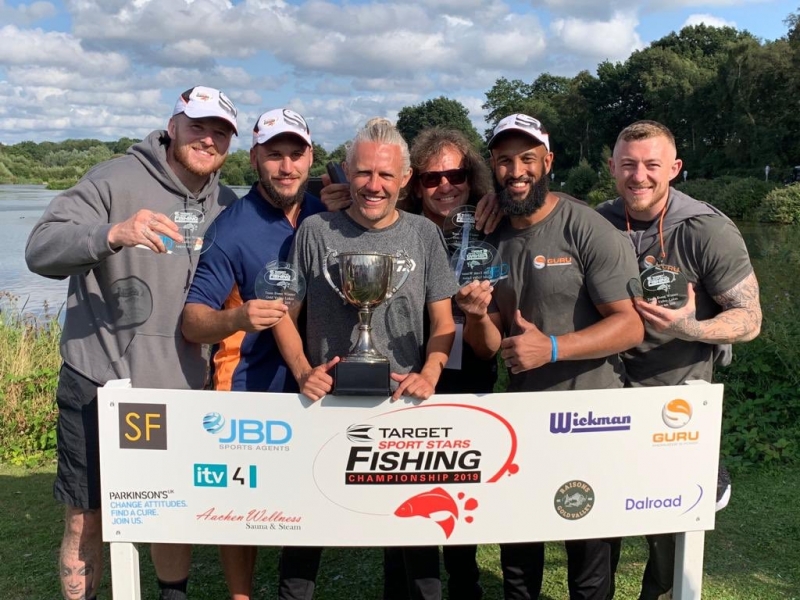 The Target Sport Stars Fishing Championship held at Gold Valley Lakes on August 6th was undoubtedly the best yet.

With 32 competitors divided into 8 teams of 4, the Championship went down to the wire. Team Super League consisting of, Tom Briscoe, Joshua Charnley, Dom Crosby and Jamie Jones Buchanan walked away with the team event title for the first time. The singles event was won by international footballer Jimmy Bullard with a winning weight of 82.2 lbs. In second place was 2 time PDC world champion Adrian Lewis with a weight of 81.5lbs.

The result of the team championship went literally to the final bell. With Team Matchroom consisting of Hungarian world champion angler Tamas Walter, boxing world champions George Groves and Darren Barker plus Matchroom chairman Barry Hearn leading by 15lbs with minutes to go. Suddenly team Super League's England star Josh Charnley hooked into a decent fish, but how decent was anyones guess. Around the presentation area it went deathly quiet. Nobody quite knew who had won, lots thought it was the Matchroom team, lots thought Team Target, who had been bagging big carp all afternoon had just squeezed in front. However after a nail biting 10 minutes wait and three re checks of the weights, it was announced that the Super League boys aided by that very last fish of the day, had pipped the Matchroom team by 1.5lbs to become team champions. In 3rd place were Team Target, led by team captain Garry Plummer with a weight of 170.9 lbs. The winning weight was an incredible 179.10 lbs. In all there was a tournament best amount of 832 lbs of fish caught over the 4 hour competition.

You can watch the event on ITV4 on the 29th and 30th of August at 8pm on both nights. The charity day raised a significant £15000.00 for Parkinsons UK. It was a great day.