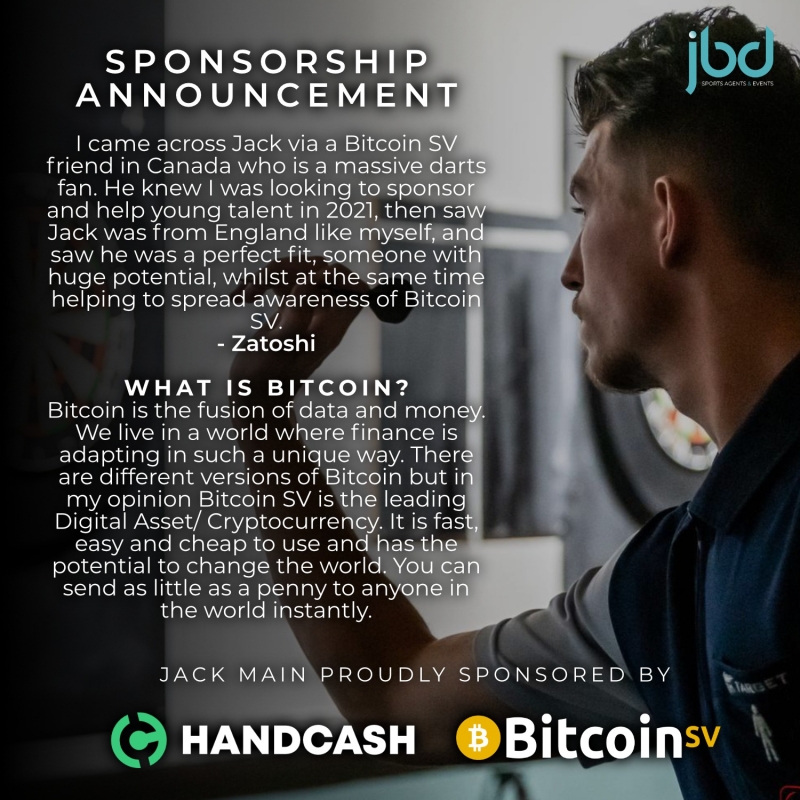 Challenge Tour darts player Jack Main has inked a new sponsorship deal within the burgeoning crypto currency community. It's a great deal for Jack and recognition of the hard work he is putting into his career. The former Norwich FC U18 footballer has only been playing darts for a short period of time but is making steady progress in both the PDC Development and Challenge Tours. Subsequently Bitcoin SV and Handcash will join Cosmo Darts and AAA Taxis as official sponsors of Jack Main for the 2021-2022 season.

“I came across Jack via a friend of mine in the crypto currency industry who is based in Canada. He is a massive darts fan and he told me about Jack. I realised that like me, Jack is based in the UK like myself, saw his profile and quickly realised he was the prefect fit. We had been looking to help a young sportsmen in his career and realised that Jack was super talented and has huge potential in darts. I also wanted people to see that the crypto currency community is willing to help people progress their careers as well as promoting Bitcoin SV simultaneously. “ Zatoshi - Bitcoin SV and Handcash OI

“  I am delighted to be involved with Bitcoin SV and Handcash. It is a massive boost and I am very grateful to Zatoshi, Handcash CEO Alex and the Bitcoin community for their help and support. I can’t wait to get to playing again this year “ Jack Main.