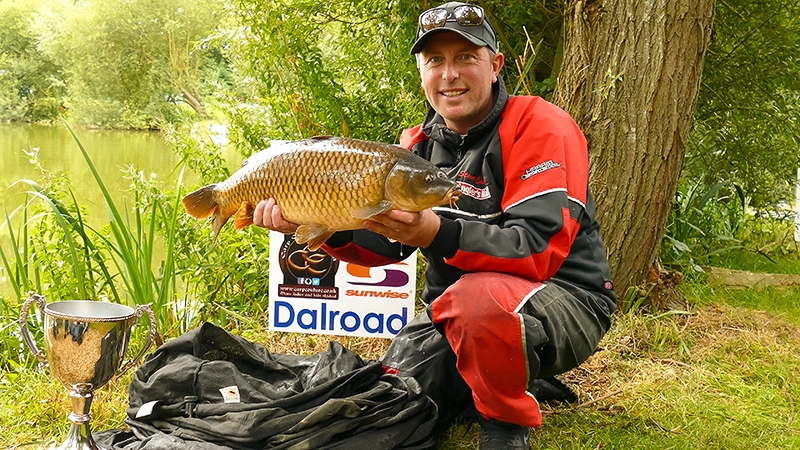 Played out in brilliant sunshine the Championship started at 10.30am with most if not all of the competitors getting fish into the keep net within the first two hours.  The clear leader at the half way stage was Paul Smith had who landed an 8lb Carp at midday.

This year’s  competition saw the competitors break for an hours lunch in the wonderful setting of the lakeside VIP marquee. At the lunchtime weigh in Paul Smith was joined by pro angler Steve Collett, PR Manager Nicola McGeady and Wickman Group guest Doug Banks in 2nd, 3rd and 4th position respectively.

The Sky televised event raising money for Haven House Children’s Hospice got underway again at 12.30 and immediately people started hooking into bigger fish. On swim 16 Steve Davis pulled out a decent Mirror carp but more crucially lost a further two. Doug Banks also landed a couple of 5lb carp and incredibly landed a third only to see it flip out of his hands before he could place it into the keep net. A couple of pegs further up professional angler Steve Collet who was fishing for Anglers Mail was quietly putting together a bag full of Carp and silver fish.

By late afternoon it became clear the Title was going to go to one of 5 men, Davis, Paul Smith, Doug Banks, Steve Collett and PDC player Richie Howson who came second in 2014's competition.

With half an hour to go Steve Collett hooked into a carp and the outcome never looked in doubt. With a crowd gathering, camera's flashing and Sky’s intrepid duo of Andy Forde and Rob Hughes present watching every tense moment. Collett played the fish into the net and became the 3rd PDC Invitational Fishing Champion.

With a day so popular, successful and for such a worthy cause it seems inevitable that 2016's competition will be even bigger and better.

For their help and support.